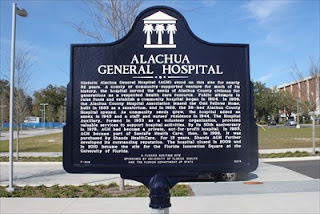 Ralph Rutledge had four tumors on his vocal cords. Lung cancer. As a regular patient, he spent close to six hours a week on a bus. Two connecting routes – three times a week – from east Gainesville to his doctors at UF Health Shands, he said.

“It took longer than I wanted it to,” the 61-year-old scoffed, pressing an artificial stoma, an indent of pink flesh at the bottom of his neck, to talk. His doctors removed his vocal cords.

Rutledge, a 40-year resident of Gainesville who doesn’t own a car, said he now only goes to the doctor once a year. The biggest problem living on the east side is “medical, getting back and forth to the doctors,” he said.

While UF Health Shands officially opened its new emergency center in west Gainesville last weekend, the facility has left some residents questioning the availability of services on the east side of town.  The Kanapaha emergency room would mark the second on Archer Road and the third to be built in west Gainesville.

For people who live on the east side, there is one non-emergency medical center on Waldo Road, a health department and a clinic on Main Street. They all close at 5 p.m.

Another alternative, Equal Access Clinic, is open to east side residents from 6 p.m. to 9 p.m., twice a week, to help alleviate the need for primary care.

UF Health Shands officials say data shows that primary, or preventative, care is what’s critical for the east side, not emergency care. But those on the east say they need more.