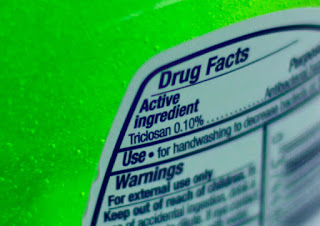 Where is triclosan found?
It’s nearly ubiquitous in liquid hand soap and dishwashing detergent, but those aren’t the only products it’s in. Triclosan is also a common ingredient in toothpaste, facewash, deodorant, a host of personal care products, and even mattresses, toothbrushes and shoe insoles. A U.S. FDA advisory committee has found that household use of antibacterial products provides no benefits over plain soap and water, and the American Medical Association recommends that triclosan not be used in the home, as it may encourage bacterial resistance to antibiotics.

What problems are associated with triclosan?
Triclosan is linked to liver and inhalation toxicity, and low levels of triclosan may disrupt thyroid function. Wastewater treatment does not remove all of the chemical, which means it ends up in our lakes, rivers and water sources. That’s especially unfortunate since triclosan is very toxic to aquatic life.

WASHINGTON — The Food and Drug Administration banned the sale of soaps containing certain antibacterial chemicals on Friday, saying industry had failed to prove they were safe to use over the long term or more effective than using ordinary soap and water.

In all the F.D.A. took action against 19 different chemicals and has given industry a year to take them out of their products. About 40 percent of soaps — including liquid hand soap and bar soap – contain the chemicals. Triclosan, mostly used in liquid soap, and triclocarban, in bar soaps, are by far the most common.

The rule applies only to consumer hand washes and soaps. Other products may still contain the chemicals. At least one toothpaste, Colgate Total, still does, but the F.D.A. says its maker proved that the benefits of using it — reducing plaque and gum disease — outweigh the risks.

The agency is also studying the safety and efficacy of hand sanitizers and wipes, and has asked companies for data on three active ingredients — alcohol (ethanol or ethyl alcohol), isopropyl alcohol and benzalkonium chloride — before issuing a final rule on them.

Public health experts applauded the rule, which came after years of mounting concerns that the antibacterial chemicals that go into everyday products are doing more harm than good. Experts have pushed the agency to regulate antimicrobial chemicals, warning that they risk scrambling hormones in children and promoting drug-resistant infections.

“It has boggled my mind why we were clinging to these compounds, and now that they are gone I feel liberated,” said Rolf Halden, a scientist at the Biodesign Institute at Arizona State University, who has been tracking the issue for years. “They had absolutely no benefit but we kept them buzzing around us everywhere. They are in breast milk, in urine, in blood, in babies just born, in dust, in water.”

The agency first proposed the rule in 2013, when it told companies that unless they could prove that chemicals like triclosan and triclocarban did more good than harm, they would have to remove the products that contained them from the market. On Friday, the agency said that it was not convinced.

The F.D.A. has given industry more time to prove that an additional three chemicals are safe and effective — benzalkonium chloride, benzethonium chloride and chloroxylenol. Products with those chemicals can stay on the market for now.

The American Cleaning Institute, a trade group, opposed the rule, saying the agency “has in its hands data that shows the safety and effectiveness of antibacterial soaps.” The group said manufacturers were continuing to work to provide even more science and research “to fill data gaps identified by the F.D.A.”

But some of the largest companies have already started removing the chemicals, in part a reaction to rising consumer concerns. Both Johnson & Johnson and Procter & Gamble announced their intention to phase out the chemicals in their products before the rule was made final, said Dr. Theresa Michele, the director of the division of nonprescription drug products at the F.D.A.’s Center for Drug Evaluation and Research.

Studies in animals have shown that triclosan and triclocarban can disrupt the normal development of the reproductive system and metabolism, and health experts warn that their effects could be the same in humans. The chemicals were originally used by surgeons to wash their hands before operations, and their use exploded in recent years as manufacturers added them to a variety of products, including mouthwash, laundry detergent, fabrics and baby pacifiers. The Centers for Disease Control and Prevention found the chemicals in the urine of three-quarters of Americans.

Dr. Halden began publishing findings on what appeared to be risks of triclocarban in 2004. He said it is an older chemical, part of the family of organochlorines, like DDT and hexachlorophene, some of which were eventually banned. Newer chemicals are much lighter on the environment, he said, but triclocarban takes a very long time to disappear. In one study in New York City, for example, his team found traces of it that dated back to the 1960s.

“It was still sitting there in Jamaica Bay near J.F.K. Airport,” he said. “This stuff makes no sense.”

FDA: No Soap For You!

The Food and Drug Administration has banned antibacterial soaps containing the chemicals triclosan and triclocarban, and more bans could be on the way. NBC's Mark Barger reports.