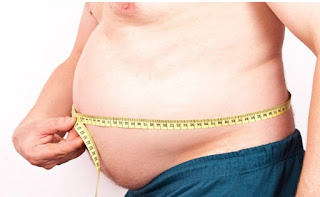 Non-alcoholic fatty liver disease (NAFLD) is a major cause of chronic liver disease. In a recent systematic review, the global prevalence of NAFLD was estimated to be approximately 24% [1]. NAFLD is predominantly associated with obesity and type 2 diabetes [1]. In addition to the United States of America (USA) and Europe, high prevalence rates of obesity have also been reported from South America, Asia, and Middle East [1,2].

In order to fully understand the clinical burden of NAFLD, it is important to recognize the full spectrum of NAFLD phenotype [2]. Histologically, the potentially progressive form of NAFLD has been referred to as non-alcoholic steatohepatitis (NASH) [2]. Although NASH represents the minority (10-20%) of patients with NAFLD, the non-alcoholic steatohepatitis (NASH) subtype can potentially progress to advanced liver disease leading to cirrhosis, liver-related mortality and hepatocellular carcinoma (HCC) [1-5]. Despite NASH being a more progressive type of NAFLD, the non-NASH type of NAFLD still carries clinical burden as it is associated with cardiovascular diseases and complications [6].

Clinically, NASH seems to be more common and potentially more progressive in the setting of insulin resistance and diabetes mellitus (DM) [7]. Other studies have also shown that DM is an independent predictor of advanced fibrosis and long-term mortality in NAFLD [8-9]. In addition, the presence of advanced fibrosis (stage>2) in NAFLD has been associated with increased liver-related mortality [10-11]. These data, therefore, may be an indicator that grade of fibrosis is a surrogate for predicting liver related mortality.

In addition to cirrhosis, there is mounting evidence that NAFLD is an important risk factor for HCC [12-13]. Although cirrhosis in NASH has been indicated as a risk factor for HCC, there is some evidence to suggest that non-cirrhotic patients with NAFLD may also be at risk of developing HCC [14]. Finally, the clinical outcome of NAFLD has led to a large number of liver transplants (LTs) in the United States. In fact, NASH is now considered the second most common indication for LT in the USA after chronic hepatitis C, and is growing [15].

In addition to its clinical impact, NAFLD has an impact on patient-reported outcomes [16]. In fact, recent data suggest that NAFLD patients may have a significant impairment of their physical health as measured by two patient-reported quality of life measurement tools, namely, the Short Form-36 (SF-36) and the Chronic Liver Disease Questionnaire (CLDQ) [17]. Finally, NAFLD has been shown to have an important economic impact on healthcare utilization [16]. In a recent study of Medicare NAFLD patients, the mean yearly inflation-adjusted charges from the outpatient setting increased from $2624±$3308 in 2005 to $3608±$5132 in 2010 in dollars of 2010 [18]. In a follow-up study of both outpatient and inpatient Medicare resource utilization, the enormous impact of NAFLD was reiterated and the median total hospital charges for NAFLD patients was $36,289 in 2010 [19]. 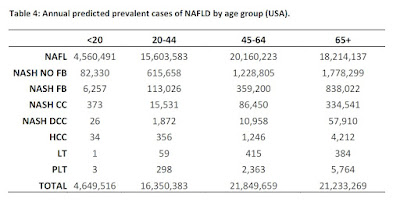 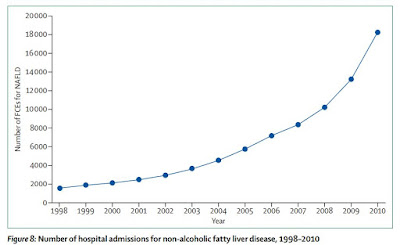 Persistent organic pollutants (POPs) are heterogeneous group of chemicals harmful to humans. In Finland the main exposure routes are the consumption of fatty fish [10] and house dust [11, 12]. Production and use of many POPs has been banned by international treaties. Decreasing time trends of exposure have been observed in the Nordic Countries e.g. for polychlorinated biphenyls (PCBs) and organochlorine pesticides (OCPs) since 1960’s and 1970’s [13], for polybrominated diphenylethers (PBDEs) since 1990’s [14] and for perfluorinated alkyl acids (PFAAs) since 2000’s [15]. Due to their lipophilicity POP are stored in humans primarily in adipose tissue and also in the liver [16], but animal and some human data indicate that dioxin-like compounds are also selectively sequestrated to liver [16, 17]. Contrary to other POPs, PFAAs are not lipophilic and they have been shown to bind to proteins in blood and especially in the liver of animals [18] and to various protein rich tissues also in humans [19].

In rats single high oral dose of certain PCBs [20] and OCPs [21] increases deposition of triglycerides to liver. These effects may also depend on the diet. For example, in rats POP contaminated salmon oil (but not decontaminated) caused hepatosteatosis [22], while in mice POP contaminated whale meat did not [23]. PCBs have also been proposed to act as a “second hit” driving steatosis to NASH in mice exposed to high fat diet [24]. Regarding PFAAs, hepotomegaly is commonly observed as a sign of hepatotoxicity in rodents and nonhuman primates [18].

In humans serum levels of certain lipophilic POPs have been associated with NAFLD related conditions (e.g. T2D and obesity). Regarding T2D, reviews of cross-sectional studies suggest/support a positive association for certain organochlorine POPs, such as trans-nonachlor, dichlorodiphenyldichloroethylene (p,p′-DDE), and PCBs [25, 26]. A recent meta-analysis of seven existing prospective studies indicated towards the temporal precedence for hexachlorobenzene (HCB) and total PCBs, but the data was insufficient to establish causality [27]. Regarding obesity, a current review concluded that OC pesticides (especially p,p′-DDE) tend to be positively associated or not associated with obesity, but PCBs have also shown inverse associations in many studies [28]. Two prospective studies have been conducted. One study among young adults observed that p,p′-DDE and PCBs with ≥7 chlorines had inverted U-shaped association with increased body mass index in 18 years follow-up [29]. In another study among elderly adults low-dose exposure to less chlorinated PCBs, p,p′-DDE, and dioxins were associated with the development of abdominal obesity in 5 years follow-up [30]. In addition, POPs and obesity together have a synergistic association with T2D or insulin resistance [31, 32]. Regarding NAFLD itself, an increase in serum PCB levels was associated with alanine aminotransferase (ALT) elevation, a proxy marker of NAFLD among general adult population (NHANES 2003–2004) [33]. To support an interaction with insulin resistance there was a positive association between PFOA and ALT and γ-GT especially in obese and insulin resistant individuals with or without metabolic syndrome in NHANES 1999–2000 and 2003–2004 [34]. Experimental studies suggest that POPs may activate nuclear receptors including aryl hydrocarbon receptor (AhR), pregnane X receptor (PXR) and constitutive androstane receptor (CAR). Through these receptors POPs may induce the regulation of genes involved in the inflammatory pathway, mitochondrial function, lipid oxidation, and lipogenesis, thereby contributing to development of insulin resistance and obesity [22, 28].