It has been claimed that there is nothing that will prevent, delay, or reverse Alzheimer's disease (www.nih.gov/news-events/news-releases/independent-panel-finds-insufficient-evidence-support-preventive-measures-alzheimers-disease). Therefore, it is typically recommended that the ApoE genotype, which represents the most important genetic risk factor for Alzheimer's disease, not be evaluated in asymptomatic individuals, and many physicians do not evaluate ApoE genotype even in symptomatic patients. However, the examples described here complement and extend previously published data that argue that these claims are no longer valid. Thus, given the success of the therapeutic regimen used with these patients, it may be appropriate to evaluate the ApoE genotype as part of prevention and early reversal of symptoms. Given the approximately 75 million Americans who are heterozygous for the ApoE ε4 allele, and the approximately seven million Americans who are homozygous, early identification and treatment (presymptomatic or symptomatic) could potentially have a major impact on the prevalence of Alzheimer's disease-mediated cognitive decline. 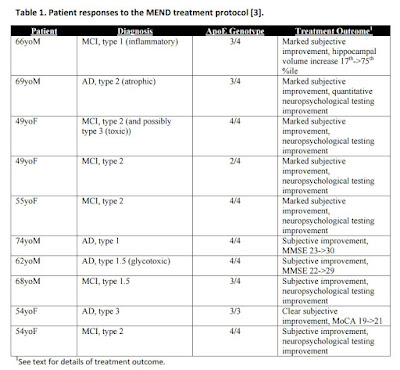