Non-Celiac 'Wheat Sensitivity' Is an Immune Disorder, Too 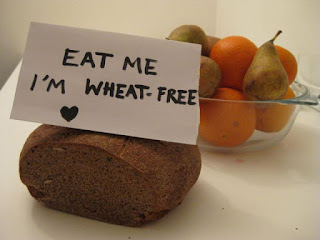 People who feel ill after eating wheat but who don't have celiac disease may finally have a biological explanation for their symptoms, a new study suggests.

Researchers from the U.S. and Italy found that people who claim to have "wheat sensitivity" do have biological reactions to gluten proteins in wheat, rye and barley. It's just that the reactions are different from what's seen in people with celiac disease, which is also triggered by gluten.

People with wheat sensitivity have been a very difficult group to identify, because they're mostly all self-diagnosed, said study author Dr. Peter Green, who directs the Celiac Disease Center at Columbia University in New York City.

While celiac disease can be confirmed through blood tests and biopsies, the same wasn't true for wheat sensitivity, Green told Reuters Health.

"We had no biomarkers or anything to say they had a disease process going on other than reporting they don't do well when they eat wheat," he said.

As a result, people would put themselves on a gluten-free diet and ultimately feel better.

For the new study, the researchers analyzed and compared the blood of 80 people who reported wheat sensitivity, 40 people with celiac disease and 40 healthy people without either condition.

In celiac disease, consumption of gluten triggers an autoimmune response that damages the small intestine. The patients with wheat sensitivity had blood tests showing signs of some intestinal damage too - although it wasn't the same kind of damage that's seen with celiac disease, and they didn't have the same pattern of antibodies in their blood that are characteristic of celiac disease.

People with wheat sensitivity also had evidence of a systemic immune response, which the researchers didn't see in the people with celiac disease.

The results suggest there are identifiable and measurable traits in people with wheat sensitivity that are separate from celiac disease, write the researchers in the journal Gut, online July 25.

The next step is to get a better understanding of what's happening inside the intestines of people with wheat sensitivity, said Green. Also, the results should be confirmed in U.S. patients, since most of the blood samples for the current study came from people in Italy.

"We'd like to confirm the findings in individuals here, but we need to see them before they go on a special diet," said Green.

The new results confirm the existence that something's going on in people with wheat sensitivity, he said.

"It also raises the likelihood that we'll be able to develop a test," he added. "Then, we can categorize individuals and treat them appropriately."

Results Individuals with wheat sensitivity had significantly increased serum levels of soluble CD14 and lipopolysaccharide (LPS)-binding protein, as well as antibody reactivity to bacterial LPS and flagellin. Circulating levels of fatty acid-binding protein 2 (FABP2), a marker of intestinal epithelial cell damage, were significantly elevated in the affected individuals and correlated with the immune responses to microbial products. There was a significant change towards normalisation of the levels of FABP2 and immune activation markers in a subgroup of individuals with wheat sensitivity who observed a diet excluding wheat and related cereals. 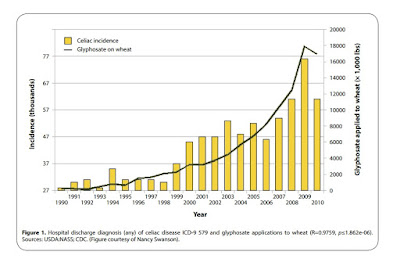 Celiac disease, and, more generally, gluten intolerance, is a growing problem worldwide, but especially in North America and Europe, where an estimated 5% of the population now suffers from it. Symptoms include nausea, diarrhea, skin rashes, macrocytic anemia and depression. It is a multifactorial disease associated with numerous nutritional deficiencies as well as reproductive issues and increased risk to thyroid disease, kidney failure and cancer. Here, we propose that glyphosate, the active ingredient in the herbicide, Roundup®, is the most important causal factor in this epidemic. Fish exposed to glyphosate develop digestive problems that are reminiscent of celiac disease. Celiac disease is associated with imbalances in gut bacteria that can be fully explained by the known effects of glyphosate on gut bacteria. Characteristics of celiac disease point to impairment in many cytochrome P450 enzymes, which are involved with detoxifying environmental toxins, activating vitamin D3, catabolizing vitamin A, and maintaining bile acid production and sulfate supplies to the gut. Glyphosate is known to inhibit cytochrome P450 enzymes. Deficiencies in iron, cobalt, molybdenum, copper and other rare metals associated with celiac disease can be attributed to glyphosate’s strong ability to chelate these elements. Deficiencies in tryptophan, tyrosine, methionine and selenomethionine associated with celiac disease match glyphosate’s known depletion of these amino acids. Celiac disease patients have an increased risk to non-Hodgkin’s lymphoma, which has also been implicated in glyphosate exposure. Reproductive issues associated with celiac disease, such as infertility, miscarriages, and birth defects, can also be explained by glyphosate. Glyphosate residues in wheat and other crops are likely increasing recently due to the growing practice of crop desiccation just prior to the harvest. We argue that the practice of “ripening” sugar cane with glyphosate may explain the recent surge in kidney failure among agricultural workers in Central America. We conclude with a plea to governments to reconsider policies regarding the safety of glyphosate residues in foods.