Melatonin effectively treats heartburn ... better than omeprazole in one study 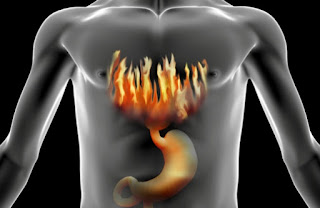 The prevalence of gastroesophageal reflux disease (GERD) is increasing. GERD is a chronic disease and its treatment is problematic. It may present with various symptoms including heartburn, regurgitation, dysphagia, coughing, hoarseness or chest pain. The aim of this study was to investigate if a dietary supplementation containing: melatonin, l-tryptophan, vitamin B6, folic acid, vitamin B12, methionine and betaine would help patients with GERD, and to compare the preparation with 20 mg omeprazole. Melatonin has known inhibitory activities on gastric acid secretion and nitric oxide biosynthesis. Nitric oxide has an important role in the transient lower esophageal sphincter relaxation (TLESR), which is a major mechanism of reflux in patients with GERD. Others biocompounds of the formula display anti-inflammatory and analgesic effects. A single blind randomized study was performed in which 176 patients underwent treatment using the supplement cited above (group A) and 175 received treatment of 20 mg omeprazole (group B). Symptoms were recorded in a diary and changes in severity of symptoms noted. All patients of the group A (100%) reported a complete regression of symptoms after 40 days of treatment. On the other hand, 115 subjects (65.7%) of the omeprazole reported regression of symptoms in the same period. There was statiscally significant difference between the groups (P < 0.05). This formulation promotes regression of GERD symptoms with no significant side effects.

In another study, heartburn symptoms improved about as well between melatonin and omeprazole, along with equivalent normalization of the pH of the esophagus (the normal stomach acid in the wrong location causes the sensation of heartburn). Intriguingly, melatonin was able to normalize the lower esophageal sphincter tone better than omeprazole (raising the possiblity that melatonin may be a better treatment to reduce esophageal cancer and refractory reflux symptoms such as hoarseness and globus sensation). As a bonus, patients on melatonin slept much better. 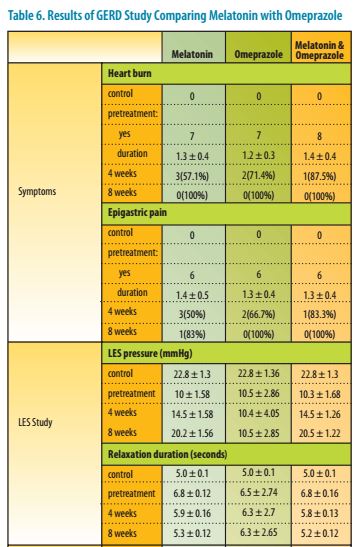 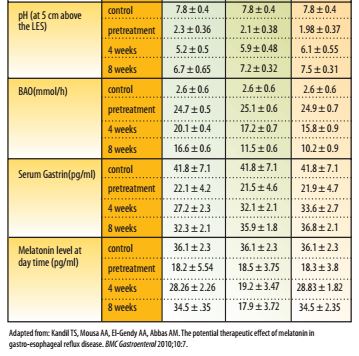 "Heartburn," also referred to as acid reflux, gastroesophageal reflux disease (GERD), or peptic ulcer disease, is characterized by a burning sensation originating behind your breastbone, sometimes traveling up into your throat. In some cases, this burning pain can be severe enough to be mistaken for a heart attack.

When food passes through your esophagus into your stomach, a muscular valve called the lower esophageal sphincter (LES) closes, preventing food or acid from moving back up.

The painful effect associated with heartburn occurs when the LES relaxes inappropriately, allowing acid from your stomach to flow (reflux) backward into your esophagus. While the conventional rationale states that this is caused by excessive amounts of acid in your stomach, that's actually an extremely rare situation, typically occurring only if you have the rare condition known as Zollinger-Ellison syndrome.

The vast majority of acid reflux cases are in fact related to one or more of the following situations: