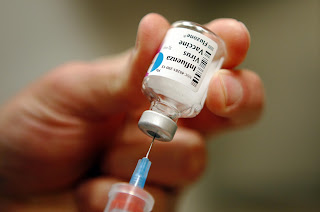 Nonylphenols are a family of closely related organic compounds called alkylphenols. They are used in manufacturing antioxidants, lubricating oil additives, laundry and dish detergents, emulsifiers, and solubilizers.[2] These compounds are also precursors to the commercially important non-ionic surfactants alkylphenol ethoxylates and nonylphenol ethoxylates, which are used in detergents, paints, pesticides, personal care products, and plastics. Nonylphenol has attracted attention due to its prevalence in the environment and its potential role as an endocrine disruptor and xenoestrogen, due to its ability to act with estrogen-like activity.[3] Nonylphenol has been found to act as an agonist of the GPER (GPR30).[4]

Thiomersal (INN), commonly known in the U.S. as thimerosal, is an organomercury compound. This compound is a well established antiseptic and antifungal agent. The pharmaceutical corporation Eli Lilly and Company gave thiomersal the trade name Merthiolate. It has been used as a preservative in vaccines, immunoglobulin preparations, skin test antigens, antivenins, ophthalmic and nasal products, and tattoo inks.[3] Its use as a vaccine preservative was controversial, and it was phased out from routine childhood vaccines in the European Union, and a few other countries in response to popular fears.[4]

MSG is one of several forms of glutamic acid found in foods, in large part because glutamic acid (an amino acid) is pervasive in nature. Glutamic acid and its salts may be present in a variety of other additives, including hydrolyzed vegetable protein, autolyzed yeast, hydrolyzed yeast, yeast extract, soy extracts, and protein isolate, which must be specifically labeled. Since 1998, MSG cannot be included in the term "spices and flavorings". The ribonucleotide food additives disodium inosinate and disodium guanylate are usually used with monosodium glutamate-containing ingredients. However, the term "natural flavor" is used by the food industry for glutamic acid (chemically similar to MSG, lacking only the sodium ion). The Food and Drug Administration does not require disclosure of components and amounts of "natural flavor."[Gov. 10]

Patients who suffered brain damage as a result of taking a swine flu vaccine are to receive multi-million-pound payouts from the UK government.

Peter Todd, a lawyer who represented many of the claimants, told the Sunday Times: "There has never been a case like this before. The victims of this vaccine have an incurable and lifelong condition and will require extensive medication."

Following the swine flu outbreak of 2009, about 60 million people, most of them children, received the vaccine.

It was subsequently revealed that the vaccine, Pandemrix, can cause narcolepsy and cataplexy in about one in 16,000 people, and many more are expected to come forward with the symptoms.

Across Europe, more than 800 children are so far known to have been made ill by the vaccine.