Half the planet will be nearsighted by 2050, and we don't know why 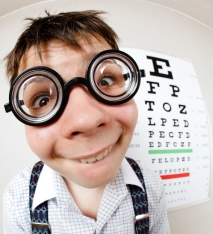 The rate of nearsightedness nearly doubled between the 1970s and early aughts, and jumped five-fold since 2000. At this rate, one in two humans is likely to have myopia by 2050, amounting to a seven-fold increase, researchers from the Brien Holden Vision Institute report in the journal Opthalmology.
Chief among the problems behind the major public health issue is that, while a few prevailing theories are floating around, we don't really know why the human eyeball is, essentially, not growing how it should, reports Wired.

Babies, it turns out, are actually born farsighted, with slightly squashed eyeballs that gradually elongate through childhood and stop once the image on the retina has come into ideal focus.
"To become normal sighted is an incredible feat of controlled eye growth," one ophthalmologist tells Wired. It's possible that spending less time outdoors is confusing this normal growth pattern, but whether that's due to light interfering with our circadian rhythms, or a lack of focus on objects that are far away, or something else altogether remains, ahem, unclear.