Carbohydrate density ... the modern diet versus the ancestral diet 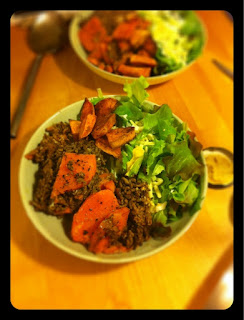 A novel hypothesis of obesity is suggested by consideration of diet-related inflammation and evolutionary medicine. The obese homeostatically guard their elevated weight. In rodent models of high-fat diet-induced obesity, leptin resistance is seen initially at vagal afferents, blunting the actions of satiety mediators, then centrally, with gastrointestinal bacterial-triggered SOCS3 signaling implicated. In humans, dietary fat and fructose elevate systemic lipopolysaccharide, while dietary glucose also strongly activates SOCS3 signaling. Crucially however, in humans, low-carbohydrate diets spontaneously decrease weight in a way that low-fat diets do not. Furthermore, nutrition transition patterns and the health of those still eating diverse ancestral diets with abundant food suggest that neither glycemic index, altered fat, nor carbohydrate intake can be intrinsic causes of obesity, and that human energy homeostasis functions well without Westernized foods containing flours, sugar, and refined fats. Due to being made up of cells, virtually all "ancestral foods" have markedly lower carbohydrate densities than flour- and sugar-containing foods, a property quite independent of glycemic index. Thus the "forgotten organ" of the gastrointestinal microbiota is a prime candidate to be influenced by evolutionarily unprecedented postprandial luminal carbohydrate concentrations. The present hypothesis suggests that in parallel with the bacterial effects of sugars on dental and periodontal health, acellular flours, sugars, and processed foods produce an inflammatory microbiota via the upper gastrointestinal tract, with fat able to effect a "double hit" by increasing systemic absorption of lipopolysaccharide. This model is consistent with a broad spectrum of reported dietary phenomena. A diet of grain-free whole foods with carbohydrate from cellular tubers, leaves, and fruits may produce a gastrointestinal microbiota consistent with our evolutionary condition, potentially explaining the exceptional macronutrient-independent metabolic health of non-Westernized populations, and the apparent efficacy of the modern "Paleolithic" diet on satiety and metabolism. 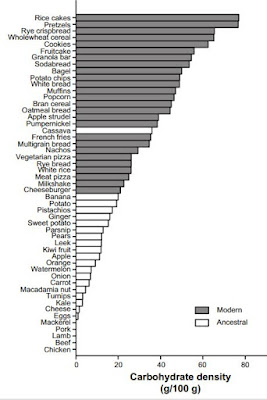