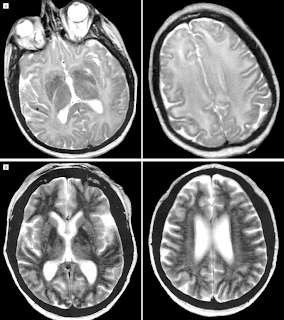 Hypothyroidism affects about 5% of the US population. Hashimoto's thyroiditis is the most common cause of hypothyroidism.  It is characterized by elevated thyroid autoantibodies. It turns out that other associated autoantibodies may also be causing problems. Antibodies to alpha-enolase are associated with abnormalities in cellular energy and brain function.

Hashimoto's encephalopathy (HE) is a rare not well understood, progressive and relapsing multiform disease, characterized by seizures, movement disorders, subacute cognitive dysfunction, psychiatric symptoms and responsiveness to steroid therapy. The disorder is generally associated with thyroid diseases and the most common feature is the presence of anti-thyroperoxidase antibodies (TPOAb). Patients are usually euthyroid or mildly hypothyroid at presentation. All age groups can be affected. The pathophysiology is still unclear, especially the link between elevated serum TPOAb and the encephalopathy. Most reported cases occurred in women and girls. Unspecific symptoms, non-pathognomonic laboratory neurophysiology and neuroimaging features make its diagnosis a real challenge for clinicians. The case of a 16year old boy, with a clinical picture of HE associated with hypothyroidism, demonstrating an excellent response to high dose steroids is presented together with a systematic review of the literature.

A 67-year-old man receiving antithrombotic therapy developed rapidly progressive amnesia. T2-weighted images of brain MRI revealed hyperintense lesions in the bilateral thalami accompanied by microbleeds. Antithyroglobulin antibodies and autoantibodies against the N-terminal of α-enolase (NAE) were identified in the patient's serum; therefore, Hashimoto's encephalopathy (HE) was suspected. Although the patient's radiological findings improved following steroid therapy, his symptoms did not improve, possibly due to increased thalamic microbleeds. Because anti-NAE antibodies are possibly associated with vasculitis, HE accompanied by anti-NAE antibodies may be exacerbated by microbleeds in patients receiving antithrombotic therapy.

Consistent with this hypothesis, autoantibodies to alpha-enolase have been found to be associated with Hashimoto's encephalopathy.[5] Since enolase is the penultimate step in glycolysis, if it were inhibited (for example by being bound by autoantibodies) one would expect decreased energy production by each cell, leading to resulting atrophy of the affected organ.

This would occur most likely through each cell shrinking in size in response to the energy deficit (and/or in extreme situations from some cells dying via either apoptosis or necrosis, depending on location).[6] This may occur as a result of there not being enough ATP to maintain cellular functions: notably failure of the Na/K ATPase, resulting in a loss of the gradient to drive the Na/Ca antiporter which normally keeps Ca2+ out of cells so that it does not build to toxic levels that will rupture cell lysosomes leading to apoptosis. An additional feature of a low energy state is failure to maintain axonal transport via Dynein/Kinesin ATPases, which in many diseases results in neuronal injury to both the brain and/or periphery).[7]

https://en.wikipedia.org/wiki/Hashimoto%27s_encephalopathy
Posted by Christopher Bray at 6:05 AM