Fixing the gut ... consider the lectins 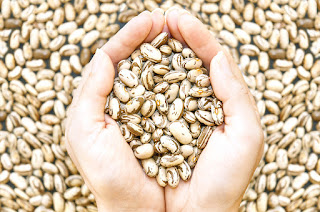 LECTINS IN THE DIET

Lectins are apparently most widely distributed in plants, where they were found in almost 1000 plants of some 3000 examined in recent years. They are particularly abundant in legumes and they account for between 1.5 and 3 percent of the total protein content of soy and jack beans. The second most common source of lectins are seafood.

Phytohemagglutinins from kidney beans can resist mild cooking and retain lectin activity even at 90 degrees C for 3 hours. Pre-soaking the beans however resulted in complete loss of lectin activity. Several investigators noted year-to-year and batch-to-batch variations in the lectin content of foods, so the occasional lectin is likely to occur even with foods normally considered safe.

This may have some significance in the development of caries. Interestingly, avocado lectin inhibited the sucrose dependent adherence of S. mutans to plaque pellicle. Approximately 1 to 5% of the ingested dietary lectins are absorbed into the blood stream. Here they can clump and bind to red and black blood cells, destroying them. It has been proposed that much of the low grade anemias seen In the third world may be resulting from destruction of red blood cells by lectin rich grain and bean diets.

Although many lectins are destroyed by normal cooking (which is why grains and beans are edible), many are not. Relative resistance to lectins was part of the classic description of wheat germ agglutinin (WGA) made by Joseph Charles Aub in 1963. WGA as Freed points out is in fact one of the more heat sensitive lectins, being destroyed after 15 minutes at 75 degrees C, whereas other wheat lectins in gluten and gliandin resist autoclaving at 110 degrees C for 30 minutes. Gibbons and Dankers noted that in over 100 food plants found to contain active lectins, seven were autoclave resistant (apple, carrot, wheat bran, canned corn, pumpkin seeds, banana and wheat flour).

Lectins which are especially rich in di-sulphide bonds such as WGA are very resistant to proteolytic enzymes, detergents, urea, alkalis and acids. Foodstuffs are naturally rich in fiber and are an important cause of allergies. Dietary lectins also stimulate mast cells which can degranulate and release stored histamine, leading several researchers to ascribe a role for dietary lectins in the genesis of food allergy.

However it is not generally known why some individuals become sensitized to food in their diets. In an attempt to clarify this, celiac disease has been extensively studied, since patients with this disease usually normalize when placed on a gluten free diet. Researchers reported that the mucous membranes of celiac patients showed sugar residues which were capable of binding to the lectins in wheat germ, which resulted In a cytotoxic reaction. Rats treated with Concavallin-A or wheat germ lectin developed a gut membrane that was paradoxically impermeable to small molecules, but very permeable to large, highly allergenic molecules, a situation which is mimicked in food allergies and celiac disease.

Lectins are found in many foods, not just grains, and consumed in smaller amounts, your body will do just fine with them. But foods that have large amounts of lectins are more problematic. Some of the lectins and foods that cause leaky gut include wheat, rice, spelt and soy. 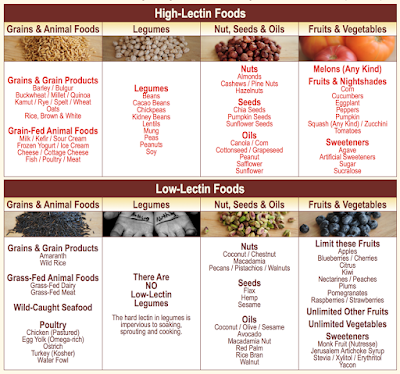 Lectins can be deactivated by soaking, sprouting, fermenting or cooking. Only the lectins found in legumes seem capable of surviving all of these deactivation methods.

Not everyone appears to be negatively affected by lectins. Many people may be having problems but they just don’t realize it until they remove lectins from their diet (normally wheat and dairy) and experienced much improved energy and weight control. And many people are able to tolerate lectins mainly due to the balance of gut flora (adequate beneficial flora serves as a protective barrier against substances that travel through the intestines, including lectins).

If you have any lectin-related health issues like arthritis, allergies or autoimmune disease, it might be very helpful to reduce your intake of lectins, especially from wheat.  It’s also very important to balance immunity by working on stress management and gut health.


https://www.functionalmedicine.org/content_management/files/AFMCPSeptember2011/
Posted by Christopher Bray at 7:28 AM