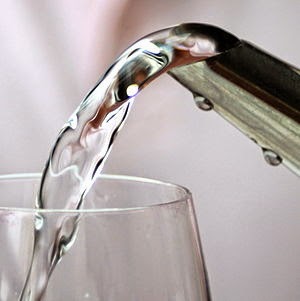 Why is fluoride in your water?
The dirty little truth about fluoride is that it's a toxic industrial waste. It's a byproduct of uranium enrichment, aluminum smelting, and phosphate fertilizers.

Fluoride became the darling of dentists and public health authorities just before World War II thanks to bad science.  H. Trendley Dean was a dentist then working for the U.S. Public Health Service.  He conducted a study of tooth decay in 345 communities in Texas.  And he found that communities with about 1 part-per-million (ppm) of fluoride in their water supply had fewer cavities.

Dr. Dean declared this the optimal level of fluoride for dental health and he advised adding fluoride to the public drinking water.

The government was very receptive to the idea.  As it happened, their new atomic bomb industry was throwing off fluoride as a waste product. Thanks to Dr. Dean, rather than paying to dispose of a hazardous waste, these businesses could now sell fluoride to municipalities for their drinking water systems.

It wasn't until years later that scientists reviewing Dean's Texas study found out how flawed it was.  Dr. Dean had selectively used findings from 21 cities to support his conclusions.  He ignored data from 272 communities that did not support his results.

Since Dean's first study, there have been no double-blind studies proving that fluoride in the water reduces cavities.  The World Health Organization (WHO) found no difference in tooth decay between countries that fluoridate their water and those that do not.

In fact, the science shows that fluoride increases cavities.

Besides making cavities worse, fluoride permanently stains teeth. In 25% of children it causes dental fluorosis – brown or yellow teeth mottled with white spots. Dental fluorosis can be an indication that the rest of your body, such as the brain and internal organs, has been overexposed to fluoride as well.

In addition to hypothyroidism, studies prove other serious health dangers of fluoride:

Heart Disease: Fluoride is linked to higher cardiovascular disease risk.  A study of 61 patients found a strong link between fluoride and calcification of the arteries (atherosclerosis), as well as increased cardiovascular events.

Brain Damage and Low IQs:  More than 100 published studies document fluoride's damage to the brain.  Researchers from Harvard University's School of Public Health found that children in high-fluoride areas had significantly lower IQ scores than those who lived in low-fluoride areas.  They warned of the adverse effect of high fluoride exposure on children's neurodevelopment.

Cancer:  Studies from Dr. Dean Burk, former head of the Cytochemistry Section at the National Cancer Institute, estimate that fluoridation caused 10,000 excess cancer deaths. His conclusions were based on a study of rats that drank fluoridated water and showed an increase in tumors and cancers in oral squamous cells and thyroid cells, and rare forms of bone and liver cancer.

Weakens Bones: As fluoride builds up in bones, it can lead to skeletal fluorosis.   That's a debilitating condition making bones extremely weak and brittle. Epidemiological studies show high fluoride exposure increases the risk of bone fractures, especially in the elderly and diabetics.  Drinking fluoridated water over many years may increase the rate of bone fractures.  It disrupts enzymes and prevents them from producing collagen, the structural protein you need to build strong flexible bones.  One study found female skeletons with the highest fluoride content had the most severe osteoporosis.

Increases ADHD: A recent six-year study published in the journal Environmental Health, found that U.S. states with a higher proportion of fluoridated water had a higher prevalence of Attention Deficit Hyperactivity Disorder, or ADHD.  Each 1% increase in artificial fluoridation was associated with approximately 67,000 to 131,000 additional ADHD diagnoses.

Fluoride has never been proven to be safe. In fact, the US Agency for Toxic Substances and Disease Registry lists fluorides among the top 20 substances posing the most significant threat to human health. Yet it is still in the U.S. water supply.  Other countries including 97% of European populations have stopped adding fluoride to their water.