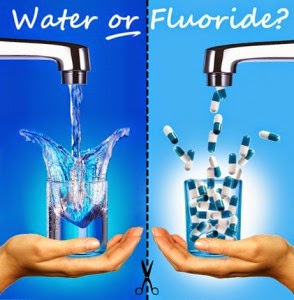 The US currently recommends a fluoride level of 0.7 mg/L,12 and thyroid dysfunction is also rampant in the US, where an estimated 20 million people are affected,13so from a public health standpoint, it makes absolutely no sense whatsoever to medicate the entire population with a drug that can either induce or exacerbate this condition.

Additional side effects of thyroid dysfunction include weight gain and depression. An equally or more important side effect is harm to the fetus in hypothyroid pregnant women, which can result in lowered IQ and other neurological deficits.

Because of all of these effects, the researchers urge city councils to stop adding fluoride to their drinking water. According to lead author Stephen Peckham:14

"I think it is concerning for people living in those [high fluoride] areas. The difference between the West Midlands, which fluoridates, and Manchester, which doesn't, was particularly striking. There were nearly double the number of [underactive thyroid] cases in the West Midlands.
Underactive thyroid is a particularly nasty thing to have and it can lead to other long term health problems. I do think councils need to think again about putting fluoride in the water. There are far safer ways to improve dental health."


Dr. Spyros Mezitis, an endocrinologist at Lenox Hill Hospital in New York City who did not participate in the study told WebMD:15

"Clinicians in the United States should emphasize to patients this association and should test patients for underactive thyroid. Patients should probably be advised to drink less fluoridated water and consume less fluoridated products, including [fluoridated] toothpaste."


Endocrinologist Dr. Terry Davies, who is also a professor of medicine at the Icahn School of Medicine at Mount Sinai, in New York City also agreed, saying that:

"This dramatic increase in thyroid dysfunction associated with fluoridation of the water supply adds to previous studies indicating that fluoride has an inhibitory effect on the thyroid gland. [The study] supports the argument that our water supply should be pure water and nothing else."