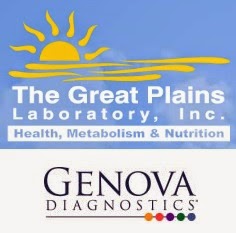 This is another very useful test that I've been using in my clinic to help guide treatment decisions to very complex diseases that often are not well treated with a conventional medicine approach. Great Plains has a version, as does Genova - both links are included below.

10 Reasons Every Individual with a Special Needs Diagnosis (Autism, Aspergers, Attention Deficit, etc.) Should Do a Urine Organic Acid Test from The Great Plains Laboratory

1.Evaluates for various fungal toxins, including specific markers for Candida. Many people rely on stool testing for candida diagnosis and miss the presence of candida toxins through the Organic Acid Test. Candida can create problems with brain function including goofiness, giddiness, and inappropriate laughter, as well as sensory problems and self-stimulatory behavior.

2.Evaluates for two specific toxins related to clostridia bacteria – HPHPA and 4-cresol. Both of these toxins can inhibit a dopamine converting enzyme leading to excess dopamine and toxic reactions in the brain and nervous system. Behavior problems such as moodiness, irritability, aggression, self-injurious behavior, sleep problems and more is associated with clostridia bacteria overgrowth.

3.The information from the Organic Acid Test helps to prioritize treatment intervention instead of just assuming everything is a candida problem. Treating for candida when clostridia bacteria are present can lead to problems, i.e. worsening behavior.

4.Evaluates for high oxalates (oxalic acid). Oxalates are compounds found in many foods, and can be worsened from candida overgrowth. High oxalates are associated with pain in the joints, muscles, and connective tissues. They can also trap heavy metals (such as mercury, lead, and arsenic) in the body, and lead to mineral imbalances as well. Behavior and self-injurious tendencies have been associated with high oxalates.

5.Evaluates for mitochondrial imbalances. The mitochondria are the energy factories of our cells. Often they are stressed because of toxins from yeast, bacteria, metals, and even oxalates. Mitochondrial dysfunction is seen in autism and can be a contributing factor to poor attention and cognitive skills, as well as poor physical growth and development.

6.Evaluates for imbalances in Dopamine (HVA) and Norepinephrine (VMA). The balance between these two important brain chemicals is critical for attention, focusing, mood, calmness and other functions of the nervous system. Attention deficit problems are commonly associated with norepinephrine imbalances.

7.Evaluates for imbalances in serotonin (an important brain chemical for mood, fine and gross motor skills, and calmness), as well additional markers that can indicate toxic stress in the brain and nervous system such as Quinolinic Acid. High Quinolinic Acid is suggestive of toxic stress in the brain and is important to evaluate before implementing certain supplements particularly L-Tryptophan which is commonly used to help with sleep.

8.Evaluates for two specific chemicals related to folate metabolism. Folate is part of the methylation cycle that supports the inner workings of the cells related to DNA function.

9.Evaluates for various nutritional markers such as vitamin B6, B5, vitamin C, CoQ10, as well as N-Acetyl-Cysteine which is necessary for the production of glutathione.

10.Evaluates for glutathione production problems. Glutathione is the most powerful antioxidant in our cells and is often deficient in autism. The Organic Acid Test evaluates for cellular markers related to this important antioxidant."