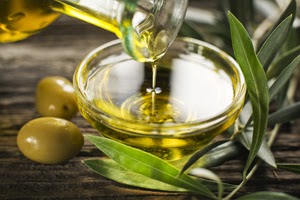 The health benefits of olive oil are often even greater in the leaves from the olive tree. Olive leaves (and leaf extract) have been used as a medicine for thousands of years. When olive oil is over-processed or cooked, much of the health benefits are lost. Keep in mind that olive oil is high in omega-9 (also found in avocado, macadamia nuts, apricot seeds, and almonds) and you should not neglect the beneficial anti-inflammatory omega-3 family of oils as well as keeping the often pro-inflammatory omega-6 family properly balanced.

The ingredient is oleocanthal, a compound that ruptures a part of the cancerous cell, releasing enzymes that cause cell death.

Paul Breslin, professor of nutritional sciences in the School of Environmental and Biological Sciences, and David Foster and Onica LeGendre of Hunter College, report that oleocanthal kills cancerous cells in the laboratory by rupturing vesicles that store the cell’s waste. LeGendre, the first author, Foster, the senior author, and Breslin have published their findings in Molecular and Cellular Oncology.

According to the World Health Organization’s World Cancer Report 2014, there were more than 14 million new cases of cancer in 2012 and more than 8 million deaths.

Scientists knew that oleocanthal killed some cancer cells, but no one really understood how this occurred. Breslin believed that oleocanthal might be targeting a key protein in cancer cells that triggers a programmed cell death, known as apoptosis, and worked with Foster and Legendre to test his hypothesis after meeting David Foster at a seminar he gave at Rutgers.

“We needed to determine if oleocanthal was targeting that protein and causing the cells to die,” Breslin said.

After applying oleocanthal to the cancer cells, Foster and LeGendre discovered that the cancer cells were dying very quickly – within 30 minutes to an hour. Since programmed cell death takes between 16 and 24 hours, the scientists realized that something else had to be causing the cancer cells to break down and die.

LeGendre, a chemist, provided the answer: The cancer cells were being killed by their own enzymes. The oleocanthal was puncturing the vesicles inside the cancer cells that store the cell’s waste – the cell’s “dumpster,” as Breslin called it, or “recycling center,” as Foster refers to it. These vesicles, known as lysosomes are larger in cancer cells than in healthy cells, and they contain a lot of waste. “Once you open one of those things, all hell breaks loose,” Breslin said.

But oleocanthal didn’t harm healthy cells, the researchers found. It merely stopped their life cycles temporarily – “put them to sleep,” Breslin said. After a day, the healthy cells resumed their cycles.

The researchers say the logical next step is to go beyond laboratory conditions and show that oleocanthal can kill cancer cells and shrink tumors in living animals. “We also need to understand why it is that cancerous cells are more sensitive to oleocanthal than non-cancerous cells,” Foster said.