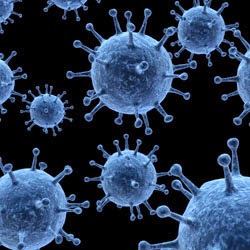 The Search for a Type 1 Vaccine
The next step, Craig says, is identifying the specific enterovirus or viruses associated with type 1 diabetes, with the goal of developing a vaccine to prevent type 1 diabetes.

“There are more than 100 strains of enteroviruses, but probably only a handful are associated with type 1 diabetes,” she says.

Virologist Didier Hober, MD, PhD, of France’s University Lille says other important questions remain about enteroviruses and type 1 diabetes, such as whether the virus is involved in all or just some cases of the disease.

He says patients who tested negative for the virus in past studies may have actually had the infection at levels that were too low to detect.

Hober says the enterovirus connection may also explain the dramatic rise in type 1 diabetes in higher-income countries like the U.S. and European countries.

The thinking is that improved hygiene has left babies more vulnerable to assaults from viruses like enterovirus because mothers today pass on fewer protective antibodies than were passed on by past generations of mothers.

If enteroviruses play a big role in type 1 diabetes, the so-called "hygiene hypothesis" could explain why disease rates have not risen in poorer, less industrialized countries, he tells WebMD.

Looking for Other Diabetes Triggers
While enteroviruses may prove to be an important environmental trigger for type 1 diabetes, it is not likely to be the only one, Seattle endocrinologist William Hagopian, MD, PhD, tells WebMD.
Very early exposure to cow’s milk and early exposure to gluten have also been linked to type 1 diabetes in some studies.

Hagopian is leading a study sponsored by the National Institutes of Health that will closely follow a large group of high-risk newborns from the U.S., Finland, Germany, and Sweden through childhood and into early adulthood in an effort to determine if these environmental exposures or others play a role in type 1 diabetes.

A broad range of natural substances experimentally confirmed to stimulate beta cell regeneration, 10 of  which are listed below:

Arginine: a 2007 study found that the amino acid L-arginine is capable of stimulating the genesis of beta cells in an animal model of alloxan-induced diabetes.

Berberine: A 2009 study found that this plant compound, commonly found in herbs such as barberry and goldenseal, induces beta cell regeneration in diabetic rats, which lends explanation for why it has been used for 1400 years in China to treat diabetes.

Chard: A 2000 study found that chard extract given to diabetic rats stimulates the recovery of injured beta cells.

Honey: A 2010 human study found that long-term consumption of honey might have positive effects on the metabolic derangements of type 1 diabetes, including possible beta cell regeneration as indicating by increases in fasting C-peptide levels.

Nigella Sativa (black seed): A 2003 animal study found that black seed consumption lead to partial regeneration/proliferation of the beta-cells. A 2010 human study also found that the consumption of one gram of black seed a day for up to 12 weeks had a broad range of beneficial effects in diabetics, including increasing beta cell function.

Stevia: A 2011 human study found that stevia has anti-diabetic properties, including revitalizing damaged beta cells, and compares favorably with the drug glibenclamide but without the adverse effects.

http://www.greenmedinfo.com/blog/10-natural-substances-may-help-cure-type-1-diabetes
Posted by Christopher Bray at 12:12 AM