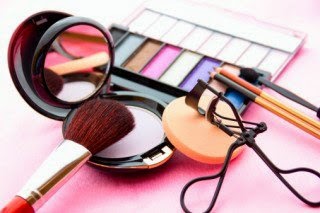 Is your makeup increasing your toxic burden? Find out which common chemicals found in cosmetics you might want to avoid.

Heavy Metals
Speaking of contaminants, make-up and cosmetic products are also frequently contaminated with heavy metals. One study conducted in Helsinki tested 88 eyeshadows for heavy metals, and 75% of the colors tested contained at least 5ppm of one or more heavy metals. The highest levels of cobalt and nickel they found were 41 and 49 ppm, respectively, and the highest level of chromium was nearly 5500ppm, with two other products near 2500 ppm. The highest value for lead was 16.8ppm, but luckily most values were much lower.

Lipsticks also frequently contain lead, which is concerning because although inorganic lead is not readily absorbed by the skin, you’ll probably swallow small amounts of it. Lead exposure from lipstick is considered below the “safe limit,” but I believe the less lead you ingest, the better.

Some metals, such as chromium VI (as opposed to chromium III, which is a vital trace mineral), are purposefully added as colorants in cosmetics. Unfortunately, Cr(VI) is more absorbable by the skin than Cr(III), and it’s often found in eye shadow, where it’s in contact with the extremely thin skin around the eye.  It has also been detected in eye shadow in toy make-up kits, where potential for harm is much greater because it’s being used on children.

A recent survey of a variety of cosmetic products by the USDA found low median values for the heavy metals tested (arsenic, cadmium, chromium, cobalt, lead, mercury, and nickel), but the wide variation seen between brands and products and overall lack of regulation is concerning, because you can never quite be sure what you’re being exposed to.

Also click on the link below and read about ...


What should I use instead?
One option is always to just forego cosmetics altogether. Many people find that emphasizing a nutrient-dense, whole-foods diet improves their skin quality and overall appearance, and might discover that they don’t want to use as much makeup as they used to.

But for those who still enjoy using makeup and other cosmetics, there are plenty of good resources. Some sources for non-toxic makeup and cosmetics include 100% Pure, Primal Life Organics, Alima Pure, and Aubrey Organics. A popular choice for natural hair dye is henna, which is a plant dye with a long history of use. Henna for Hair is a good resource to get started.