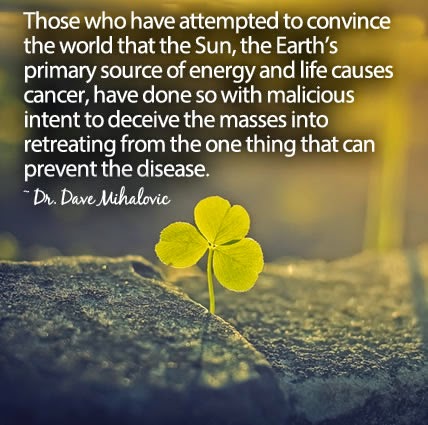 Comprehensive scientific reviews indicate that 83% of 785 sunscreen products contain ingredients with significant safety concerns. Only 17% of the products on the market block both UVA and UVB radiation which is the intended purpose by manufacturers of sunscreen, so what's the point? The assessment by the Environmental Working Group's Skin Deep database was based on a review of nearly 400 scientific studies, industry models of sunscreen efficacy, and toxicity and regulatory information housed in nearly 60 government, academic, and industry databases.

At least 50% of products on the market bear claims that are considered "unacceptable" or misleading under sunscreen safety standards. An analysis of marketing claims on hundreds of sunscreen bottles shows that false and misleading marketing claims are common. They give consumers a false sense of security (based on myths) with claims like "all day protection," "mild as water," and "blocks all harmful rays" which are completely untrue, yet are found on bottles. Consumers might assume that, because researchers have implicated ultraviolet light in skin cancer development, sunscreen automatically thwarts skin cancer. They play on this consumer bandwagon of fear and hope on an issue shouldn't even be an issue...blocking the sun!

Almost half of the 500 most popular sunscreen products may actually increase the speed at which malignant cells develop and spread skin cancer because they contain vitamin A or its derivatives retinol and retinyl palmitate which accelerate tumor growth.

Scientists have reported that particle size affects the toxicity of zinc oxide, a material widely used in sunscreens. Particles smaller than 100 nanometers are slightly more toxic to colon cells than conventional zinc oxide. Solid zinc oxide was more toxic than equivalent amounts of soluble zinc, and direct particle to cell contact was required to cause cell death. Their study is in ACS' Chemical Research in Toxicology, a monthly journal.

Another common and toxic ingredient in sunscreens is titanium dioxide. New research published in ACS' journal, Environmental Science & Technology found that Children may be receiving the highest exposure to nanoparticles of titanium dioxide. The geometry of titanium dioxide (TiO2) based nanofilaments appears to play a crucial role in cytotoxicity having a strong dose-dependent effect on cell proliferation and cell death.